Art and Social Justice Come Together in Yarnbombing at Brock Commons 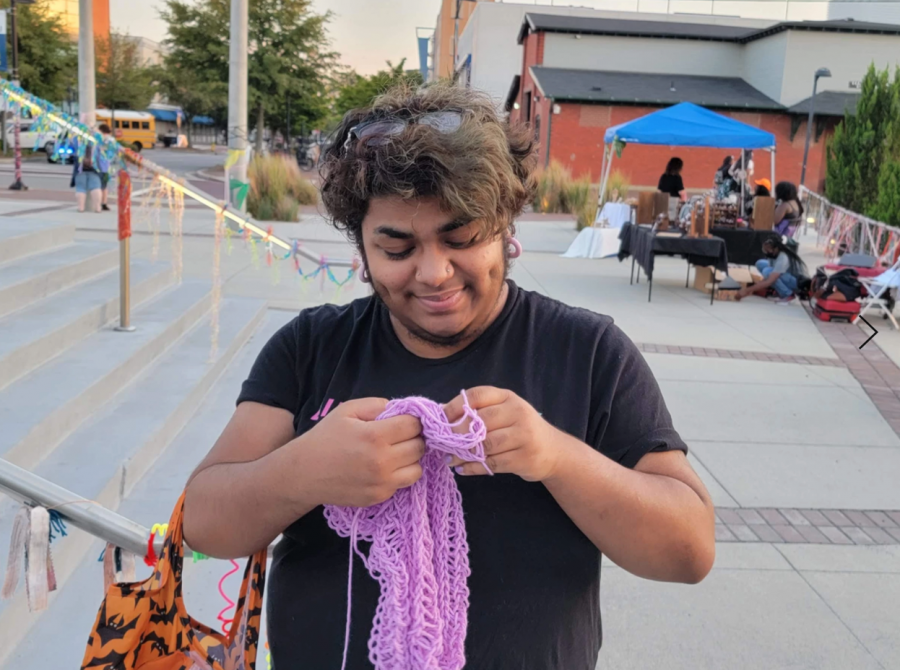 The sun is just about to set on Saturday, October 2, but there are still people on the steps of Brock Commons. Dr. Ginger Brinn and Dr. Natalia Pilato sit at a table covered in fibers and yarn, and a dozen feet away students have more in their hands. The whole of Brock Commons is decorated in yarn – a product of their combined Fiber Arts and ​​​​Arts for Social Justice Courses, created for ODU’s first Themester.

The project that they are all working on is called yarnbombing, a-street art-meets-activism form of craftivism that has been given space to breathe by the school.

Surrounding them are some of the projects: ODU’s mermaid is draped with nets, a message about waste that washes into the oceans. Along one side of the railing overlooking water are names knotted to the railing and a message in the center: “Victims of Police Brutality (Hampton Roads)”.

Many of the poles supporting the structure are wrapped in colorful yarn, and a knitted QR code frames the corner of the setting. A rainbow of fibers hangs from the center of the pavilion and moves into the breeze

The students in the class had come out on the Thursday before to hang all of their pieces, which they had spent several weeks in class working on. Dr. Pilato had spent the whole day working with students, making sure everything went smoothly.

“I am a social activist,” she had explained at the beginning of our conversation,” and all my own personal research is rooted in social activism, so whenever I do these types of projects I’m incredibly dedicated to them.”

Dr. Pilato had warned the students that there may be problems with vandalism and destruction of the art, because “you never know what’s going to happen. And that kind of stuff goes with the territory.”

But they’ve had the exact opposite result – instead, people are coming up to them asking to join. While setting up the interactive exhibit, they had to ask people to come back later on Saturday to add their own pieces then. As we talk, nearby, an 11-year-old girl and her father work together to add their own piece to one of the railings.

A piece of art in the yarnbombing project by the ARTS 281/381 classes.

“We’re hoping to just kind of grow, that people might wanna just come and add some,” said Dr. Pilato. “Yarnbombing, for people who know about it, is something that is known. And if they see a place like this, people who do crochet and know about it, they will come and do their own yarnbombing, once you create a space for it. So I’m kind of hoping that I come back next week and there’s more.”

“What’s great about this is that it’s so bright and colorful, it’s really concrete. So it has this real good vibe and positive feeling and even though they’re addressing some really tough topics they’re doing it through this way that’s very bright and cheerful. So it adds this element of – it doesn’t feel so doomsday – but yet the topics are there. And I think that’s what’s really nice.”

Kiran Kumar is also lingering in the Brock Commons on a Saturday evening, days after their project is due. They’re helping make a colorful spider web in one of the railings. They’re the artist behind the “Victims of Police Brutality” piece waving in the wind.

Kumar is a recent transplant from D.C., and wanted to get more familiar with the situation surrounding police brutality in Hampton Roads. They used the Washington Post’s database of victims of fatality to find names and stories.

They believe that the research and creation probably took them upwards of 15 to 20 hours.

“A lot of my peers were into the idea of a love lock, and [my concept was] what if we made that a little bit more craft, partially interactive,” they said.

“I made it a point to understand, because we’re right across from a police station in the art building. There’s got to be a connection that we can make there, regarding community, and trying to uplift support[ers],” Kumar said, talking about BLM 757’s protests and marches.

“I knew that the community market was going to be happening today, and I know that we did this personally to disrupt and uplift it. They do this weekly, and this is something new and we want to help bring attention to the vendors, and we want to draw people to come here.”

All of the yarn and fibers used were donated by the 757 Creative ReUse Center. The exhibit will be in Brock Commons until the end of October.