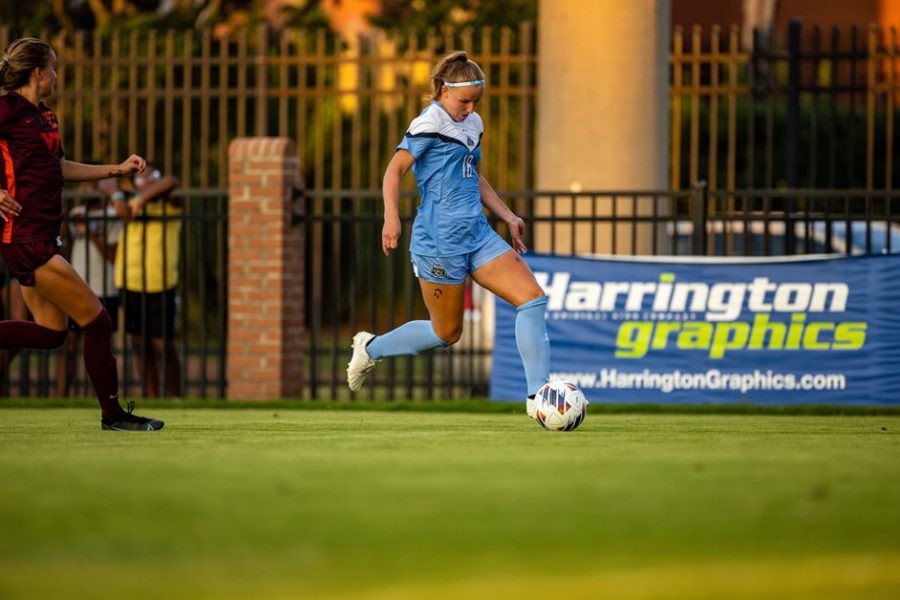 Labor Day weekend means an extra day off for many, but not for the ODU women’s soccer team. The Lady Monarchs were looking to assert their dominance over another in-state program with a matchup against Longwood University. The ODU team came into this contest 0-4 after a 3-0 defeat against the talented Virginia Tech Hokies on Thursday. Longwood had a record of 3-2 after a recent 2-0 loss to the College of Charleston. Both teams were poised to rebound from their losses and seek a victory.

The game opened with the Lancers in possession of the ball. In the early minutes of the match, ODU had multiple trips into the penalty box but was not able to capitalize due to some attempted passes that flew long from the goal. The action picked up in the 16th minute when junior Yuliia Khrystiuk’s long-range shot found its mark that opened the scoring in the game, giving Old Dominion a 1-0 lead and their first goal of the season. In the 21st minute senior Lancer forward Karla Morich broke through the defense and gave a great feed to Khrystiuk which barely missed its mark, keeping the Monarch lead at 1-0.

The barrage by the ODU forwards continued as Senior Anna Torslov got her foot in the fun, putting up a good shot in the 27th minute which missed the net. ODU continued to control the possession of the ball, but just two minutes later, Morich missed the header that could’ve increased the lead but kept the Lancers at pace to try and tie the match. ODU’s defense was stout throughout the first half, giving the Monarchs forwards the possession and a fair amount of shots on goal. In the closing seconds of the half, senior and ODU captain defenseman Emma Terefenko made a great block which prevented a shot on goal by the Lancers that closed out the first half with a 1-0 advantage.

In the early minutes of the second half, things were extremely similar to the first half as ODU continued to put on the pressure by adding two more shots on goal in the first ten minutes of the half. In the 53rd minute, senior midfielder Ece Turkoglu shot flew into the top left corner of the goal, missing the net by a few inches that could’ve increased the Monarch lead to two. The ODU defense continued to play at a strong level throughout the second half. In the 63rd minute, senior defenseman Riley Kennett blocked a shot in the open field, keeping Longwood from a shot on goal, which kept their offense at bay with only one shot on the net throughout the match. ODU continued to dominate with possession after spending much time on the Longwood side of the field through the middle portion of the second half.

As the game approached the 70-minute mark, Longwood made a late push, gaining some possession in the final 20 minutes, but this was to no avail for the Lancers due to the strong play by the Lady Monarch defense that included two great plays by sophomore defenseman Anessa Arndt in both the 78th and 79th minutes. The ball continued to be in Longwood’s possession in the closing minutes, but they could not capitalize and had no luck on a corner kick in the 89th minute that brought the game to a close and gave ODU their first victory of the season.

“We are delighted to get the win,” said ODU head coach Angie Hind. “It’s been a rough start and we all know that. The biggest thing tonight was to get the win.”

With this bounce-back home win, the Lady Monarchs now move to 1-4 on the season and will make a trip up north to Richmond, VA to seek back-to-back victories as they face the Richmond Spiders on Thursday, Sept. 8 at 5 p.m. Old Dominion will return to their home soccer complex next Sunday, Sept. 11, when they host American University. ODU will begin their inaugural sun belt conference matchups with an away game at Louisiana on Friday, Sept. 16.