“Learn it. Live it. Do lines of it…” A Metalhead’s Review of “Metal Lords” 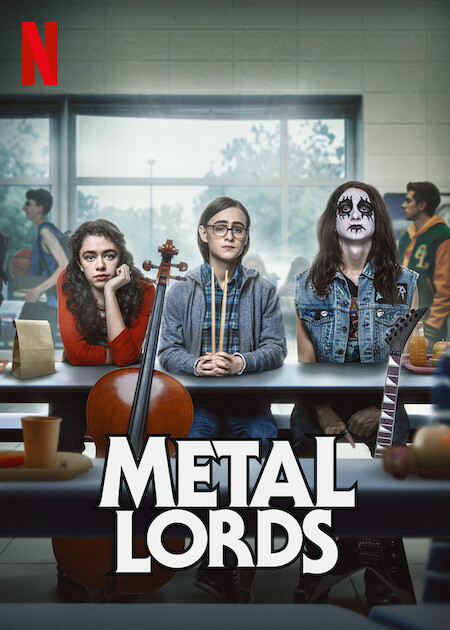 Netflix has been releasing plenty of binge-worthy shows and captivating movies throughout 2022. “Metal Lords” is a movie centered around three teenagers and their involvement with metal music. The comedy was written by D.B. Weiss, the writer and director of the “Game of Thrones” series. Tom Morello, famously known as Rage Against the Machine’s guitarist, was an executive music producer for the film. Both of these great minds are metalheads and are deeply fond of the music scene. Seeing the involvement of these individuals made for a promising film that hopefully wouldn’t let the metal community down.

The movie follows three high school students who are all socially awkward in their own right. The story is from Kevin’s perspective, a novice drummer who was given a double bass drum kit by his best friend, Hunter, to start a metal band. Hunter is a guitarist and is the main metalhead of the group. He’s deep into the scene and is always seen wearing metal merch. The last of the trio is Emily, a Scottish student who’s an experienced cellist and has anger issues.

The movie kicks off with Hunter and Kevin trying to practice a song written by Hunter. Kevin, only a marching band drummer, has no experience with a complete kit. In fact, he isn’t at all familiar with metal or its culture. Kevin starts practicing with a drum kit given to him by Hunter and sees Emily, a girl he knew from Marching Band practice, playing the cello. He sees her as a talented individual and wants her to join the band. However, Hunter is against the idea of having a cellist. After Hunter finds out about a “Battle of the Bands” event his school is hosting, he signs up for the competition. In order to prepare Kevin, Hunter gives him a list of songs from iconic metal bands. This is what sends Kevin spiraling down a rabbit hole of metal culture. Kevin decides to share the same list with Emily, which sends her on a path to learning about the music. The plot develops from here on out into a story about high school bonds, dealing with negative emotions and struggles, and how impactful music can be to an individual.

The film features a lot of great homages to metal artists and culture. Bands like FEAR, Celtic Frost, Iron Maiden, and Meshuggah are among many bands that are referenced throughout the film. The literature and nerd culture that became a part of metal can also be found throughout the movie. Certain scenes show books like “Inferno” by Dante Alighieri and games like Dungeons and Dragons. The former alone inspired plenty of songs like “Demons Gate” by Candlemass or “Charon” by King Diamond. The fantasy genre itself inspired a style of metal dedicated to it known as power metal. The soundtrack carries iconic songs from bands like Black Sabbath and Metallica. Both do a great job catering to the metal audience and acknowledging its roots. It even features a whole scene with cameos from the genre’s icons like Rob “Metal God” Halford.

The film pulls no punches when it comes to making fun of behaviors and misconceptions that plague the metal community, internally and externally. One such example is how it’s riddled with people who are pretentious about subgenres and artists in different genres. Hunter is the prime example of a tongue-in-cheek portrayal of these folks. He has an aggressive outlook on life and prides himself on being someone who only goes against the grain. If something isn’t “metal” to Hunter then he just doesn’t like it. Hunter even goes as far as being unnecessarily nasty towards others who have different tastes or are part of the “status-quo”. Then, there’s a bassist who tries out for Hunter’s band that mindlessly plays notes and focuses more on the “stage elements” within the genre. The bassist situation serves to poke fun at the misconception that metal doesn’t require any actual talent to be played. It’s safe to say that the bassist didn’t make the cut.

“Metal Lords” might not appeal to older metalheads as much as it would to younger members of the community. After all, the movie is centered around a Gen Z perspective more than a Gen X or millennial perspective. The bullying and high school mannerisms are different from past times. Certain parts of the movie might be hard to watch for older folks because of its cringe-inducing humor. That’s not to say that it’ll have the wincing effect on a younger audience but it might be more relatable.

What the movie might lack in age relatability, it makes up for with the genre’s nostalgia. There’s a sequence where Kevin starts practicing his drums to “War Pigs” by Black Sabbath. The scene essentially shows how he’s getting better at the drums over time but it doesn’t stop there. Kevin stops dressing the way he originally used to. The colors in his wardrobe start changing, he starts wearing boots, then starts wearing band shirts. The music didn’t just become part of his practice sessions, it became a part of him. That specific scene perfectly encapsulates the process a lot of people in the metal community went through. Once it sticks, it’ll stick for life, or at least long enough to impact you as a person. It’s not until you’ve gotten completely sucked into that culture that you realize how much it’s affected you.

While Kevin’s personal growth is spot on for a lot of metalheads, it’s not all the film has to offer. “Metal Lords” shines by portraying why people become infatuated with heavy music in the first place. It’s implied that metal became an outlet for Hunter ever since his mom left his family. Kevin, a shy and non-confrontational individual, slowly gains confidence through his improvement in drumming skills and metal music’s “bringing truth to power” attitude. It’s also implied that Kevin doesn’t really get much emotional support from his parents since they’re working around the clock. Emily has a loving family but struggles with a condition that makes her prone to angry outbursts. What everyone in the cast shares is being a sort of “outcast” within their highschool’s society. The niche culture gave Emily an opportunity to be accepted by welcoming people. Everyone goes through a transformation of character. This motley crew of misfits respects the reasons why metal became so huge in youth culture from the 80s to the present. It’s composed of people who’ve gone through troubles in life, who feel out of place, and who desire to be part of something bigger than themselves. At the end of the movie, everyone ends up growing into a better version of themselves.

Ultimately, “Metal Lords” might present issues for older audiences who fell in love with the metal genre with some of its awkward humor. However, the movie does as much justice as it can to the metal scene within its hour and 48 minute runtime. It delves into today’s generation of high school culture, along with the new bloods present within the metal community. It carries a vibe that is reminiscent of Jack Black’s “School of Rock” and “Superbad”. While the film isn’t as impactful as these classics, it’s a great film for a casual watch. It is ultimately charming and carries underlying themes of individuality, companionship, dedication, and personal growth. It’s worth the watch for fans of the music and for anyone looking for a couple of laughs.