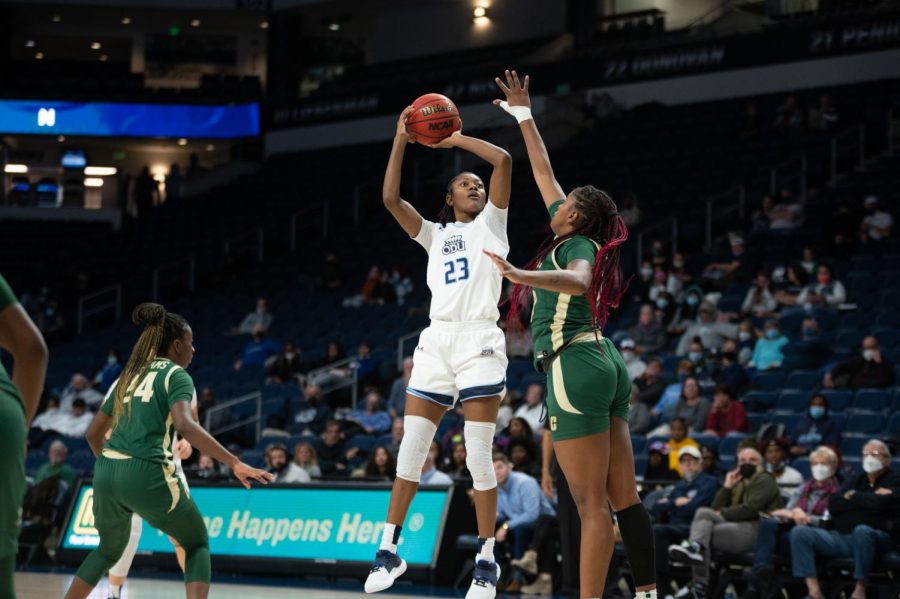 When you talk about Old Dominion University’s athletics, the women’s basketball program is one of the first teams that comes to mind. Historically, ODU has a great program, with 25 NCAA Tournament appearances and a 1985 National Championship. Last season, the Monarchs turned in a 13-11 overall record under head coach DeLisha Milton-Jones, and went 7-9 in conference play. Old Dominion finished the season by winning seven of its last nine games, including a road win at eventual conference champion Middle Tennessee State. They also secured three wins in three nights at the C-USA Tournament to reach the semifinals as a No. 6 seed.

The Monarchs were set to return four of their five starters from last season and former C-USA Sixth Player of the Year Aziah Hudson. ODU was a team to watch out for as they had a trio of star players in graduate student Iggy Allen, junior Ajah Wayne and senior Amari Young that were selected to the Conference USA Preseason All-Conference Team. Allen, a transfer from FAU, averaged 22.2 points and 10.9 rebounds per game, setting program records. She had 11 doubles-doubles, which ranked her 35th in the nation in terms of double-doubles. Wayne, guard,  averaged 15.5 points and 9.7 rebounds. She is a talented  player that has played a huge role for the Lady Monarch and is seen as one of the team leaders. Young averaged 13.6 points and 11.2 rebounds. She was dominant on the board’s night in and night out and scores at any given time last season. She is competitive and provides the Monarchs with everything that they need as she puts on a clinic. In addition to the individual preseason awards, the Monarchs tallied six first-place votes and were expected to finish second place in the preseason poll.

The Lady Monarchs began the season with an exhibition victory over Christopher Newport University 87-70. The regular season started with South Carolina State coming into Norfolk and the ODU squad would get past the Bulldogs easily by a score of 80-52. Next up for the Lady Monarchs was the Anne Donovan Classic with a good Auburn Team. ODU would get a second-half boost to get past the SEC for 57-44. Although they got a quality win over an SEC opponent, the Lady Monarchs would drop their next two games against in-state schools, They lost to George Washington in a close battle 47-45 and then went on the road and fell to VCU handily 71-48.

After a 2-2 start to the regular season, ODU began to find their rhythm and went on a trip down to Texas to participate in the Van Chancellor Classic. They would defeat Saint Joseph’s 67-50 and then went on to beat Texas Tech 59-45. They ended the event with a third victory after defeating Stetson 61-51. The Lady Monarchs kept the winning going as they would go up to Williamsburg and defeated William & Mary 68-55.  Old Dominion would continue its winning ways by earning four more victories on the season. They started with a crushing win over Bowie State 70-29 and then had another dominant performance against Norfolk State that resulted in a 76-47 victory. ODU then went on the road and got past Appalachian State 85-49 and ended the back-to-back road games with a tight win over Temple 71-68. With the winning streak, Old Dominion improved their record to 10-2 with conference play being around the corner on the schedule.

Although things are getting better throughout this pandemic, COVID-19 still has an impact on collegiate athletics. The next three scheduled games for the Lady Monarchs would get postponed due to outbreaks among the teams. After a two-week hiatus, the ODU team got back onto the court again when they traveled to San Antonio to play UTSA, in which they would go onto winning the contest 57-46. They would lose their next game against UTEP in a close matchup that went down to the final minute 53-48. After the loss, the Lady Monarchs returned home for a four-game homestand. They would win three of the four games with the first victory over FAU 61-48, They then got past Rice late in the game and won 69-59 and also defeated North Texas 67-57. In the last game of the homestand, ODU would lose to Charlotte in a close matchup that went down to the wire 64-61. Next up for ODU was another multi-game road trip that started with a win at Charlotte. They would go to Marshall and defeat the Herd 62-47 on their home court that brought the team record to 16-4 (6-2 C-USA) in the regular season.

The Lady Monarchs would end their road trip with a loss at Western Kentucky 71-57. They redeemed the defeat with three-straight victories with wins over FIU, Middle Tennessee State and a big win on the road at UAB, who is the top seed in the west division of Conference USA. In mid-February, Coach Milton-Jones was one of the eight nominees selected into the Women’s College Basketball Hall of Fame Class of 2022. She was honored for her induction in the pregame before their next home game against Marshall. The Lady Monarchs wound up losing the game 64-48 and their record was 19-6(9-4 C-USA). ODU bounced back after that loss and went on to win the next three games against WKU, FAU, and FIU. In the last two games of the season, Old Dominion dropped both contests and finished the regular season 22-8 (12-6 C-USA) and clinched the third seed in the east division. They also clinched a first-round bye in the conference tournament.

The Conference USA Tournament began on March 8 and ODU traveled down to Frisco, TX to play against UTSA in the second round on March 9 that resulted in a 65-45 victory for the Lady Monarchs. In the quarterfinals, ODU met North Texas and wound up losing a close game 65-58 and were eliminated from the tournament. Although it wasn’t the ending they were hoping for, the Lady Monarchs earned a bid in the Women’s NIT tournament, the alternate to the NCAA Tournament. After a week to prepare, Old Dominion traveled up to Towson, MD to play the University of Towson in round one of the WNIT. They played a tough competitive matchup against the Bobcats, but they would pull away late and earn the 72-66 victory and earn the right to host the round two matchup against Columbia.

In the second round contest, ODU’s late comeback would come up short and they were defeated 62-59 and the season was over. After the game, coach Milton-Jones talked about what it meant to have an opportunity at playing postseason basketball and what they needed to set their sights on a new goal, which is making the NCAA Tournament. “I love the fact that we got these reps in the postseason. These reps breed success. We’re grateful that we were able to play in the WNIT,” she said. “This is a perfect segue and springboard for us to go dancing.”

Having brought in a new team, the ODU womens program took the next step towards building a foundation. Being able to gain some experience in the postseason is pivotal for the young Monarchs team as they look to improve over the offseason and set their sights on bigger aspirations in the future.