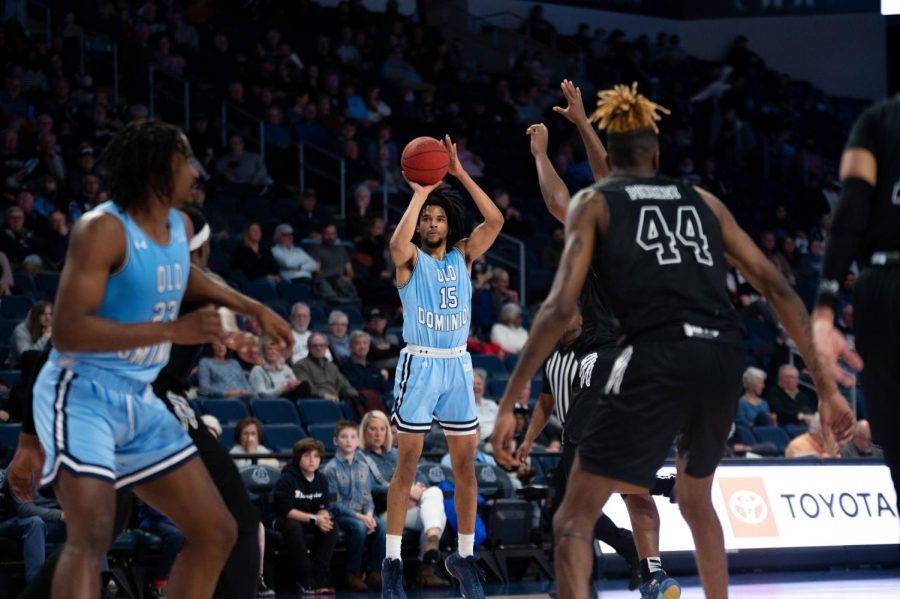 Charles Smith IV # 15 goes up for the 3-point shot against FIU.

It was a huge weekend of men’s basketball for Old Dominion. It has been an underwhelming season so far, but the Monarchs still have a shot at playing postseason basketball. They recently defeated Florida Atlantic on Thursday evening 70-51 and improved their record to 11-17(6-9 C-CUSA). They returned to the court on Saturday evening to host Florida International University who came into the matchup 15-12(5-10 C-USA). It was a pivotal game for both teams, in regards to seeding in the upcoming Conference USA Tournament.

Both teams broke off from their huddles and took center stage as it was time for the opening tip. Old Dominion would get ahead early on as senior Austin Trice opened the evening up with a mid-range jumper. The Panthers responded to the score from deep as they drained a 3-pointer to take the 3-2 advantage. On the ensuing possession, sophomore Jaylin Hunter found some space and nailed his first 3-pointer of the evening to regain the Monarch lead. Trice would get the ball again and hit the float shot that would increase the lead to four. FIU would retaliate with another 3-pointer to cut the deficit down to one. After an ODU miss, FIU took it down court and got the tough layup that gave them their first lead of the night 8-7. Trice was a game-changing factor throughout the game as he dominated the paint. He would bring the roar out of the fans with a powerful slam dunk that gave ODU the 9-8 advantage.

After a few minutes, ODU led 14-12 and would go on a six-point scoring run that made it 20-12. The Panthers would end the scoring run with another 3-pointer that cut the deficit to five. After the Monarchs missed their shot, FIU came down the floor and converted the alley-oop that made it 20-17. The game was back and forth up until late in the half. As the score was 22-20 in ODU’s favor, the Monarchs generated a big 15-point scoring run that extended their lead up to 17 with junior Kalu Ezikpe leading the way with six of the 15 points. The Panthers eventually would end the scoring run after getting to the basket for an easy layup. On the ensuing drive, the Monarchs continued to shine offensively as sophomore Charles Smith IV nailed a 3-pointer that made it 40-24. The Monarchs would go into the half with a 42-25 advantage.

Although the Monarchs had the strong end to the first half, it did not rattle the Panthers as they came out of the

break revamped and determined to get back in the ballgame. They began the half with two back-to-back 3-pointers that made it 44-31. That wasn’t it though because the Panthers would continue to hit their shots and outscore ODU 18-2 to start the second half. The game was now anyone’s taking as it was 46-43. The Panthers added another point at the free throw line and made it a two-point game. Junior Mekhi Long would get the offense rolling again with the quick layup that extended the lead back to four. FIU would answer the layup with a jumper that made it a one-possession game again.

On the next FIU possession, Hunter would get a steal  that would turn into points for Old Dominion as they led 50-46. FIU responded on their next possession by cutting the lead to two, but the Monarchs began to pull away again with another late half surge. Just like we saw at the end of the first half, ODU wanted to finish this game with a victory and outscored FIU 21-6 in the next few minutes of the game which gave them a comfortable 71-55 advantage. Old Dominion would hold off the second half comeback from FIU and would go onto winning the contest 83-63.

With the win, the Monarchs clinch at-least fifth place in the conference tournament that will also give them a first round bye. Old Dominion would have to win four games in four days to win the tournament, but if they hadn’t clinched the bye, the Monarchs would have had to win five in a row. Trice led the way for ODU with 23 points, 15 rebounds and three assists. Smith IV, the transfer from SMU, finished the game with a career-high 15 points. Ezikpe tallied 14 points and seven rebounds in the victory. Hunter added 13 points, five rebounds and three assists.

In the post game presser, head coach Jeff Jones talked about how his team battled through adversity when FIU made things interesting in the second half. He also mentioned that it is relieving to play on Wednesday, instead of being in the first round on Tuesday. “It got close. It got too close for comfort, they figured it out. We got a couple of stops and made some big baskets,” Jones said. “Obviously, we didn’t want to play on Tuesday. We have put ourselves in a position that we at least know we’ll play on Wednesday, and that’s a good thing.”

Old Dominion improved their record to 12-17(7-9 C-USA) and will get back on the road as they travel down south to play Louisiana Tech on Wednesday, March 2. Tip off is set for 7 p.m. The Monarchs will return to Norfolk for their last game of the regular season on Saturday, March 5 when they host Middle Tennessee State with tip-off slated for 2 p.m. It is also going to be Senior Day for Austin Trice, C.J. Keyser and A.J. Oliver III. After that will be the conference tournament that will begin with round one on Tuesday, March 8.