My Experience with the Surface Go 2 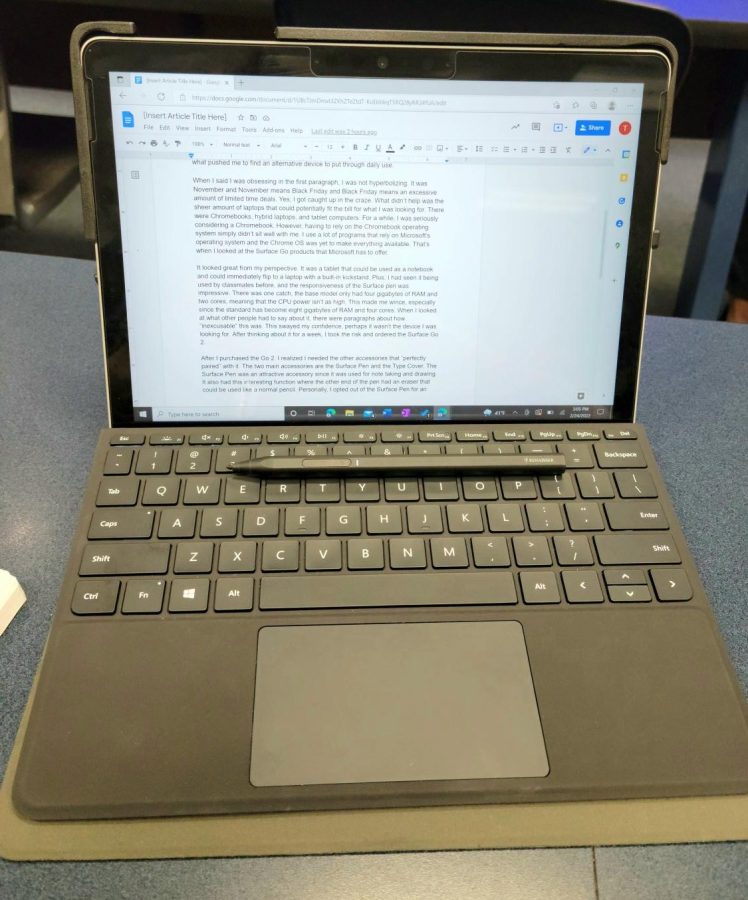 If you like staying informed about new advances in the technology world, then chances are that you also stay up to date on new laptops, graphics cards or software. During the month of November in 2021, I found myself obsessing over buying a laptop to take on-campus and everywhere else where I needed easy access to office work and Blackboard assignments. It’s not because I didn’t have a laptop, it’s because the one I had was a literal drag to carry around. I have a Lenovo Legion that weighs five and a half pounds with a brick for a charger. I know five pounds isn’t a lot, but when you add on the other things you might need for classes, it gets frustrating. All the way from organizing my bag, setting up the laptop when you need it, then repeating the first step when you have to go. Aside from the complication of carrying it, it’s an expensive piece of hardware. One that I am not willing to risk taking on-campus for daily usage. This is what pushed me to find an alternative device to put through daily use.

When I said I was obsessing in the first paragraph, I was not hyperbolizing. It was November and November means Black Friday and Black Friday means an excessive amount of limited time deals. Yes, I got caught up in the craze. What didn’t help was the sheer number of laptops that could potentially fit the bill for what I was looking for. There were Chromebooks, hybrid laptops, and tablet computers. For a while, I was seriously considering a Chromebook. However, having to rely on the Chromebook operating system simply didn’t sit well with me. I use a lot of programs that rely on Microsoft’s operating system and the Chrome OS was yet to make everything available. That’s when I looked at the Surface Go products that Microsoft has to offer.

It looked great from my perspective. It was a tablet that could be used as a notebook and could immediately flip to a laptop with a built-in kickstand. Plus, I had seen it being used by classmates before, and the responsiveness of the Surface pen was impressive. There was one catch, the base model only had four gigabytes of RAM and two cores, meaning that the CPU power isn’t as high. This made me wince, especially since the standard has become eight gigabytes of RAM and four cores. When I looked at what other people had to say about it, there were paragraphs about how “inexcusable” this was. This swayed my confidence, perhaps it wasn’t the device I was looking for. After thinking about it for a week, I took the risk and ordered the Surface Go 2.

After I purchased the Go 2. I realized I needed the other accessories that “perfectly paired” with it. The two main accessories are the Surface Pen and the Type Cover. The Surface Pen was an attractive accessory since it was used for note taking and drawing. It also had this interesting function where the other end of the pen had an eraser that could be used like a normal pencil. Personally, I opted out of the Surface Pen for an alternative pen, the Renaisser Raphael 520. I bought the Surface Type Cover instead of looking for an alternative. It paired beautifully with the Surface Go 2 and didn’t require any sort of Bluetooth connection like the Surface Pen. All that was required was that the keyboard be attached to a special magnet port which directly powered the keyboard instead of having to charge it separately.

When I first used the Surface Go 2, I was using it as a standalone tablet for a week. While it did function well as a tablet, it started becoming apparent that the Surface Go 2 was meant to be used as a hybrid product. Especially since it did feel awkward using a large touchscreen keyboard at first and the responsiveness with it left much to be desired. After my adventure of using only the touchscreen, I started to use the two accessories I purchased for it. The Go 2 really started to shine in every use it was given. The keyboard felt so natural, and the little tablet handled opening and closing programs on the go beautifully. Whenever note taking with the pen was required, the Type Cover snapped off easily. The flow of the Surface Go operated excellently, even with 5 tabs on Microsoft Edge, OneNote, and Spotify operating at the same time. This is partly thanks to the S Mode that the tablet operates under, making it more efficient at handling different tasks and using the system’s resources efficiently.

Even though the base tablet is not a powerhouse like the Surface Pro tablet. It offers a lot given the specs the Go 2 has. Of course, that wholly depends on the usage. I focused on using this for writing, doing work, and taking notes in class. While it does have an eventual stutter with its performance, it still can steamroll through basic usage that is vital for a lot of college students. It’s portability and design definitely make it an attractive piece of hardware for the average student. However, the biggest lesson I learned from using the base model of the Go 2 is that it’s not meant to be pushed like other laptops. It shines where it’s meant to be and if it’s pushed too hard, the faults in having lower specs really start to show themselves.

The verdict? It’s a pretty good tablet/laptop hybrid for the price and the performance. The price for the device itself is affordable with the only downside being the accessories that are needed should you want the keyboard and the pen. Personally, I believe 2-in-1s are very versatile, from streaming Netflix to writing a three-page report due in six hours. The portability is great and is sure to perform under more stressful use should the higher-end model be purchased. Should you be interested in one, I would recommend looking at one in-store to ensure that this is the product for you.