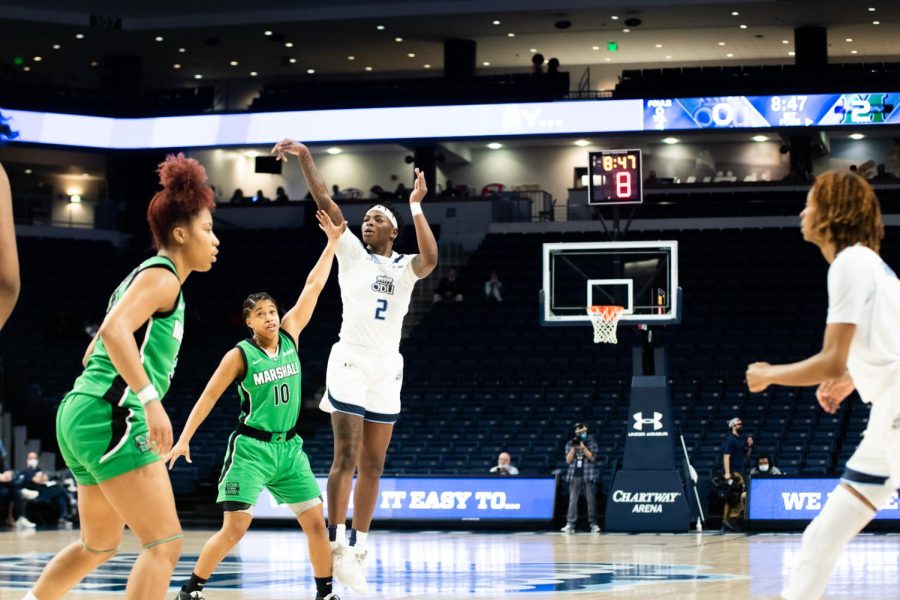 Iggy Allen #2 goes up for the mid-range jump shot

It was a special evening at Chartway arena, as the Monarch community celebrated the recent announcement of head coach DeLisha Milton-Jones getting into the women’s basketball Hall of Fame. Before the game, the Chartway crowd of about 1,800 rose to its feet and gave Milton-Jones a standing ovation along with congratulating videos from ODU alums and her players. The Lady Monarchs 19-5(9-3 C-USA) came into the game off of a win at UAB earlier this week, and were looking for back-to-back victories, but Marshall 12-10(7-6 C-USA) came into the matchup with the party-spoiler mindset.

ODU won the tipoff and the game was on. Marshall would get the evening started with a quick bucket in the paint. The Lady Monarchs came back on the next possession and found senior Ajah Wayne as she got to the basket and made the layup, along with an and-one opportunity. Wayne would make the free throw and ODU led 3-2. The Herd would quickly come back and hit a jump shot to regain the lead. ODU would inbound the ball and get it to junior Brianna Jackson as she was fouled on the shot, but would make both free throws.

The Herd would retaliate with another basket as they would go to the foul line for the and-one and convert that made it 7-5. Wayne would get another score for the Lady Monarchs with a mid-range jumper that tied it up at seven. Marshall would answer the ODU score with another layup of their own. ODU found Wayne again and she got into the paint and past her defender for the tough layup that tied it at nine. The Herd would get the ball down the floor and found their star player Savannah Wheeler for a 3-pointer to make it 12-9. The Herd would start to hit shots late as they outscored the Lady Monarchs 13-5 and took a 22-14 lead going into the second quarter.

Marshall would begin the second frame with more points after making both of their free throws to increase the lead to ten. On the ensuing possession, Jackson would get into the paint and up for the layup. After a Marshall miss, graduate student Iggy Allen would take the ball down floor and nail a 3-pointer that cut the lead to five. ODU would get the ball back and find Jackson for another layup that made it 24-21. Wheeler and The Herd would end the scoring drought with another 3-pointer from beyond the arc. A few minutes went by in the quarter before the next points were scored, Marshall added two more free throws to make it 29-21. Wayne would get fouled and converted both of her free throws. The Lady Monarchs forced a steal on the next possession and found Wayne again for another bucket. Marshall ended the half with two more 3-pointers from Wheeler that gave them a 35-25 lead at the break.

ODU began the half with possession and a revamped mindset as they went out with a 11-0 scoring run that gave the Lady Monarchs a 36-35 advantage. Marshall would finally get on the board with a quick bucket on the ensuing possession that gave them the lead again. After an ODU miss, Marshall gets fouled and converts both of their free throws to make it 39-36. Senior Aziah Hudson would go to the foul line after a Marshall shooting foul and made both of her shots that cut the deficit to one. Marshall would score the next few buckets that gave them a 43-38 lead late in the third. The Lady Monarchs would cut the lead down to two with a free throw from Wayne and a jump shot from Mariah Adams. The Herd ended the quarter making two of three free throws that made it 45-41 going into the final ten minutes.

To begin the fourth, The Herd got on the board first with a quick layup. After an ODU miss, comes down the court and finds Wheeler for another 3-pointer that brought it to 50-41. Marshall would get another 3-pointer as they continued to shine late in the game. ODU was not able to convert a shot and The Herd retaliated with another bucket that made it 55-41. Wayne would put an end to the run with a mid-range jump shot. Marshall comes back down the court and hits the step-back jumper to extend the lead back to 14. On the ensuing possession, Jackson found her way to the bucket for another layup that made it 57-45. The Herd would score the next seven points in the final minutes of the contest that brought the lead up to 19 points. With a few seconds left in the game, Wayne would get a layup and the-and-one bucket that made it 64-48, which would be the final score.

Wayne finished with 23 points and eight rebounds while Jackson tallied ten points and four rebounds. The rest of the starting five combined for eight points, and 14 rebounds. Hudson came off the bench and finished the evening with seven points. ODU shot 28.8 percent from the field and 12.5 percent from beyond the arc. On the other side, Marshall 13-10(8-6 C-USA) was led by Wheeler, who made 9-16 shots and three of those coming from 3-point range. She finished with 30 points, six rebounds and three assists.

“I feel like Marshall came out with a lot of incentive. They wanted to be the spoilers,” Milton-Jones stated. “They had a zest about everything they were doing on the court. They played with that level of intensity that changed the whole course of the game for us, but we’ve learned from this, and now it’s time to put this behind us and move on.”

Old Dominion fell to 19-6(9-4 C-USA) and are back in action on Saturday when they host the Hilltoppers of Western Kentucky. WKU 17-8(10-4 C-USA) is in third place in the East Division, whereas the Lady Monarchs are right behind them in fourth. It is also Senior Day and Hoops for the Cure game, ODU’s annual cancer survivors game. Tip Off is scheduled for 2p.m.