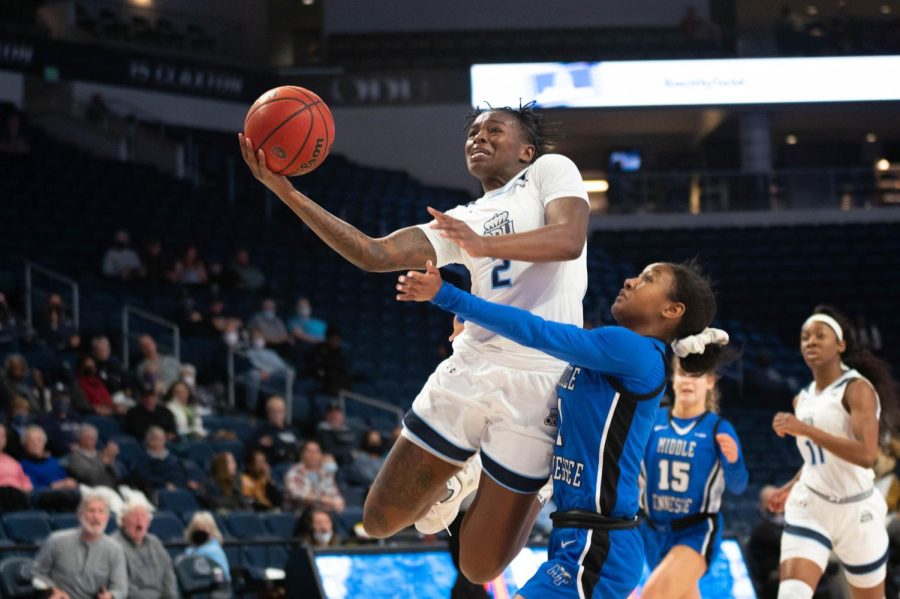 Iggy Allen #2 gets over her defender for the tough layup.

It was a competitive thriller in Norfolk on Thursday evening, when the Old Dominion Lady’s basketball team welcomed Middle Tennessee State for a tough conference matchup. The Lady Monarchs came into the game off a win against FIU earlier in the week and were 17-5(7-3 C-USA). It was not going to be an easy test for ODU because MTSU was the defending east division champions and had a 16-4(8-2 C-USA) record. A win for ODU would propel them up a spot in the east division standings.

As both teams came to center court for tipoff, it was game time. The Blue Raiders got the first possession and would nail a mid-range jump shot to take the early 2-0 advantage. After a Monarchs miss, MTSU came back down the court and would get fouled. They would convert one of two free throws and the lead was three. On the next possession, junior Ajah Wayne got things going for ODU with a drive into the paint and up for the layup. The Blue Raiders would head back to the foul line on their next possessions and drain all free throws to take a 5-point lead. Graduate Student, Iggy Allen would get fouled on her shot attempt on the next ODU possession and would make both free throws to cut the deficit to three. MTSU would counter with another bucket of their own when they had a strong transition offensively off the ODU miss. Late in the quarter, the Lady Monarchs went on a 7-0 run that would tie the game at 11 after Kaylen Nelson hit a 3-pointer in the final seconds that brought the Chartway crowd to its feet.

Starting the second quarter, MTSU would jump out to a 13-11 lead with a layup in the paint. After an ODU miss, the Blue Raiders came back down the court and tallied two more points.   Junior Aziah Hudson found some space and nailed a 3-pointer that cut the game to one point.  On the ensuing possession, MTSU would retaliate with a 3-pointer of their own to make it 18-14. The Lady Monarchs began to find rhythm and would go on a 14-0 scoring run in the next few minutes of the quarter with buckets from Wayne, Allen, senior Mariah Adams and junior Amari Young that brought the game to 28-18 in ODU’s favor. The Blue Raiders would end the drought with a layup that cut the deficit to eight. On the next Monarch possession, Wayne would find a lane and drive to the basket for another two points. ODU would take a 30-20 lead going into the half after missing the final shot at the buzzer.

Coming out of the break, Allen would go to the foul line and make one of her two free throws to make it 31-20. MTSU would respond with two made free throws of their own to bring the lead back to single digits. Wayne would continue to shine for ODU as she hit a 3-pointer in the corner that brought the

lead back to 12. The Blue Raiders came back with a quick five-point run that brought the game to 34-29. Hudson would go to the foul line and sink one of two shots to make it 35-29. On the ensuing ODU possession, junior Brianna Jackson got fouled on the shot and it went down, but the and-one opportunity was missed as ODU led by eight. MTSU came back down the court and nailed another 3-pointer that brought the deficit within five. The Lady Monarchs got back down the court and found Allen open at the top of the key and she extended the lead to seven. Both teams would continue to get buckets on both sides of the floor, but ODU was able to maintain some breathing room. They led 49-39 going into the final ten minutes of the game.

The Blue Raiders wasted no time to begin the fourth as they got to the basket and got the early layup that brought the game within ten points. Junior Kaye Clark would get down in the lane, but post up for a jump shot that brought the lead back to ten. The MTSU offense would not go away as they got back into the paint again and got up for another layup. After a Monarchs miss, the Blue Raiders brought the game to 52-45 after attacking the bucket with more points in the paint. The Blue Raiders got the ball back and went back down the court and sank another 3-pointer that cut the lead to four. Jackson would get the ball on the next ODU possession and she drove into the paint for the tough layup that ended the MTSU 6-0 scoring run. On the ensuing Blue Raider possession, they hit another shot beyond the arc that brought the game to 54-51. Allen would make a pivotal bucket in the last two minutes of the game that made it 56-51 ODU.  MTSU would get fouled on their next offensive possession and would make both free throws to cut the lead to 3. ODU was not able to sink a basket on their next offensive push and MTSU had a chance to tie it. The Blue Raiders got down and hit another 3-pointer that tied the game at 56 with under a minute to go. Young would get fouled on the next ODU possession and she made one of two shots that gave the Lady Monarchs a 57-56 lead with just over 30 seconds left. With five seconds left in the game, MTSU had the possession in Monarch territory with an inbounds pass incoming, but on the inbounds, it was thrown out-of-bounds and it was ODU ball. Allen would go to the line and make one of her two free throws and the Lady Monarchs escape with a win over MTSU 58-56.

In the post-game presser, head coach Delisha Milton-Jones shared her thoughts on her team getting the win and how it was a great game in general with two good programs going at it. She also paid her respect to the MTSU program for the hard-fought matchup. “Tonight was a tremendous win for us. We know they’ve got a great program,” Jones said. “I thought it was a game of two great teams going at it. It was a clash of titans.”

Old Dominion improved their record to 18-5(8-3 C-USA) and now hold the 3-seed over MTSU in the east division. They will hit the road this weekend and travel to the University of Alabama-Birmingham(UAB) on Super Bowl Sunday with tip-off slated for 3p.m. It will be a true road test for ODU because the Blazers are the top seed in the west division of C-USA. The Lady Monarchs return home on Thursday, Feb. 17 and Saturday, Feb. 19 when they welcome Marshall and Western Kentucky into town.