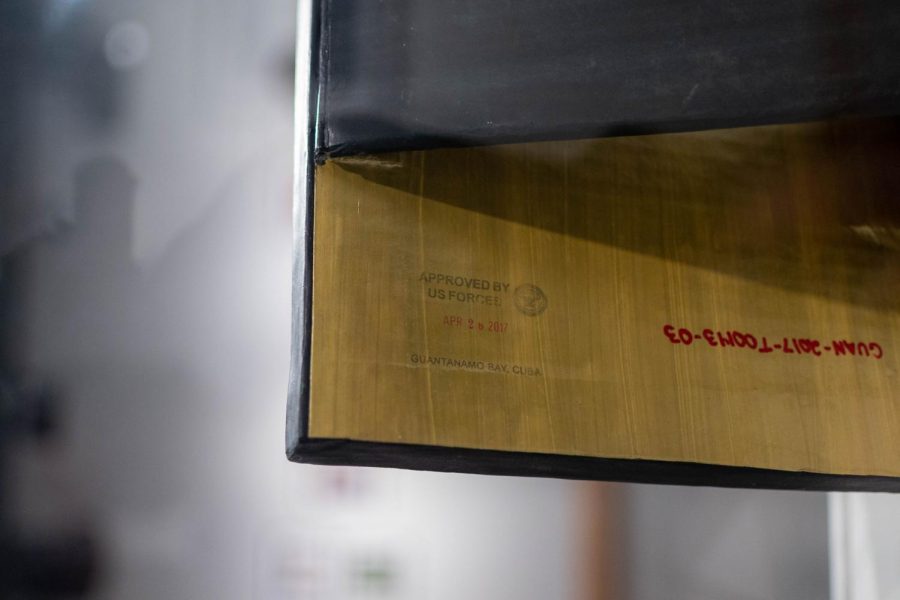 “Imagine spending years inside of a cage with a tarp over it. You’re unable to see out or congregate with other people. The drab green walls, the orange jumpsuits, the dull gray floor; you long for color, and you yearn for nature. You’re surrounded by the sea, though except for a few days when a hurricane is blowing in and the tarp is removed, you cannot see it. But when that tarp is gone, you can look out at the ocean. You can see the ships going by, and it gives you a sense of hope, a glimpse of the world outside Guantánamo Bay.”

This is only a wink at how Dr. Cullen Strawn humanizes the detainee artists behind the Baron & Ellin Gordon Art Galleries’ latest exhibition: Art from Guantánamo Bay.

On the evening of Jan. 27, folks from across Hampton Roads fought the bitter cold to join Strawn, executive director for the arts and director of the Gordon Art Galleries, in celebrating six artists and 101 of their most evocative pieces currently on display on Monarch Way. The Work of Moath Al Alwi and Ahmed Rabbani–both current detainees– is featured alongside that of Muhammad Ansi, Abdualmalik Alrahabi Abud, Sabri Al Qurashi, and Mansoor Adayfi– all of whom spent more than a decade at the Guantánamo Bay Detention Camp without any formal charges.

“I felt it was a fitting choice for our educational gallery,” reflects Strawn. “Throughout ODU we study most aspects of humanity, and the phenomenon of Guantánamo Bay and its detainees are unique while relating to sociology and criminal justice, artistic expression, and other important topics.”

The Guantánamo Bay Detention Camp is a United States military prison located off the coast of Cuba that opened in January 2002, only four months after 9/11. Approximately 780 detainees have passed through ever since, 702 having been transferred out, 30 passing away after their transfer, and nine having died while at Guantánamo. Today, 39 detainees remain, 18 of whom are currently held in law-of-war detention, meaning they remain uncharged without access to counsel.

According to the International Committee of the Red Cross, “The United States justifies the indeterminate detention of the men held at Guantánamo Bay and the denial of their right to challenge the legality of the deprivation of liberty by classifying them as ‘enemy combatants.’” In other words, 18 people have been stripped of the right to challenge their treatment by U.S. forces–and have subsequently lost all personal liberties–on the grounds that human rights do not apply to accused terrorists, including those who have not been charged as such.

Both Al Alwi and Rabbani have been cleared for release, though it may take years to be placed in host countries, says Strawn.

During ODU’s 44th Annual Literary Festival, an excerpt read aloud from the memoir of former Yemeni detainee, Mansoor Adayfi, titled “Don’t Forget Us Here,” revealed that he was falsely accused of being an Egyptian Al-Qaeda leader after warlords ambushed and sold him to the U.S. forces in northern Afghanistan. The large sum of reward money offered by Americans at the time routinely prompted such behavior, as warlords reaped the benefits. In return, Adayfi spent a gruesome 14 years at Guantánamo Bay, uncharged and continually tortured.

“Human life is fraught with hardship, which we all experience in varying degrees,” Strawn notes. “Perhaps few of us can say we have been captured as a teenager, misidentified, tortured with increasing levels of severity and ingenuity, held for years without charge, and relocated to a foreign country away from family where we live under the stigma of such experiences. Through art, detainees have longed to experience beauty and have had to make a way from no way, using trash and the like to create works with resourcefulness and determination.”

Panels with various theme descriptions can be found throughout the exhibition, identifying notable motifs such as protest, memories and visions, the American Dream, and even music. Though, the theme of nature is by far the most prominent.

Flowers, seascapes, fruits and sunsets line the walls of the gallery in explosive color, often produced with oil pastels or acrylic paint on standard sheets of paper. But perhaps the most ornate are the model ships constructed by Moath Al Alwi, formed with found objects like cardboard, clothing fabric, prayer caps, beads, wooden meat skewers and soap.

Several guests flock to these ships–perfectly situated beneath protective glass cases– including one of ODU’s International Studies students, Katelyn Minor.

“Realizing how old I was when some of this started has really been impactful for me.” says Minor, gazing down at Al Alwi’s work. “This started in 2002, and I was born in 1999. To see this work created by people who have been detained for almost my entire life, experiencing such atrocities… it’s terrifying, and enlightening, and it puts me at a loss for words.”

Perhaps the evening’s most honorable guest could be found perusing the exhibition on “Gordon,” a telepresence robot allowing for visitors to view the galleries from anywhere around the globe. Mansoor Adayfi, still unable to return home to Yemen, joined the reception via video call from Serbia to mingle with guests and speak on his personal experience at Guantánamo.

“You know, when I see people view our art, I feel heavy,” Adayfi reveals. His energetic orange scarf nearly distracts from his calm demeanor. He is bubbly, and surprisingly open, but still somewhat reserved as he ponders his next words carefully.

“I can see the appreciation of the art, and I also see how powerful it is. When I look at it from a writer’s perspective, it’s kind of like a language. This is how the soul communicates. Soul to soul. You don’t have to meet the person [viewing your art], maybe you’ll never meet that person, but you can still speak to them–to their soul– through the art. It is not just colors and strokes, no, it is emotions, it is secrets, and it can freeze time and memories.”

The Baron and Ellin Gordon Art Galleries will display “Art from Guantánamo Bay” until May 7, 2022, and students are encouraged to check it out. In Minor’s words, “If you have the time, come and see this. You don’t always get to see first-hand the creations of people who have experienced such atrocities, and there are plenty of students on this campus who will never see something like this again if they don’t see it now.”